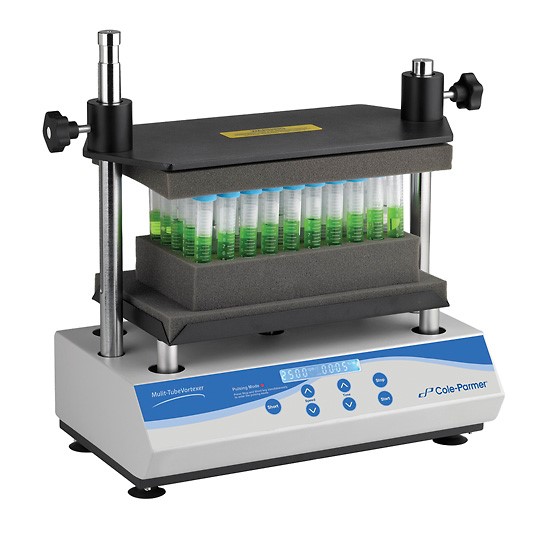 It can't be denied that lab mixers are staples in any laboratory, scientific or medical institution as these are critical to accomplishing sample preparation and testing, as well as other experiments. Procuring one that can take in the sample types you will be handling with and can meet your application requirements, whether for basic mixing, homogenization, disintegration, or emulsification of samples, is important for elevated lab throughput. So that you won't have to replace your unit often, make sure to check how many samples you are and will be handling with in the future even before buying a lab mixer. With the High-Capacity Vortex Mixer Standard from Cole-Parmer that comes with a 12 in platform, you can blend solutions of up to 3.3 lbs. Take advantage of this laboratory mixer by not going above its maximum capacity for a longer operational life. In the look out for something with a larger capacity? You can pick the B3D5000 BenchWaver 3D Rocker from Benchmark Scientific. If you are just looking for a unit having a similar capacity as this Cole-Parmer one but is also from another global mfg, check out the BV1010 BenchMixer XL Multi-Tube Vortexer from Benchmark Scientific instead.

Other factors to consider when choosing a laboratory mixer that can propel your workroom's mixing efficiency and productivity include covered speed type and the speed range. The High-Capacity Vortex Mixer Standard from Cole-Parmer presents variable speed to precisely blend samples from 500 RPM up to 2500 RPM, making it a favored unit for labs that often work on life science, cell culture, and microbiology tasks. If this vortex mixer does not quite meet what you are searching of, you may want to consider the BV1005 Mortexer Vortex Mixer from Benchmark Scientific having the same speed type but with a higher maximum speed.

Tried and Trusted Laboratory Mixing No Matter What Application

There are diverse types of laboratory mixing instruments available in the market to serve all possible sample solubilities, viscosities, and solutions. Don't be confused on which one to acquire by understanding each type of laboratory mixers. Small footprint vortexers are utilized for quick suspension of cells as well as mixing and agitation of samples in containers such as vials, beakers, and microplates. Most activities that involve mixing oil and water, enyzme protein analysis, or diluting acids by mixing water rely on vortexers like the High-Capacity Vortex Mixer Standard from Cole-Parmer to fulfill the job. A digital vortex mixer demonstrating orbital mixing movement, a temperature range of 4°C-65°C, the Cole-Parmer EW-04725-60 presents the best possible mixing for a variety of molecular biology, biochemical, and bioscience applications.

Thanks to a user-friendly LED screen, you always get a clear cut readout of mixer operational details with the Cole-Parmer EW-04725-60.

With a brushless DC motor, this unit is favorable for extended runs and is maintenance-free.

Fully mix samples and fluids through this Cole-Parmer vortex mixer that showcases an orbital mixing movement.

Speed range of the Cole-Parmer EW-04725-60 can smoothly be managed by use of its digital control.

If you need to modify mixer speed while in operation, it won’t be a problem with this unit as it delivers variable speed from 500 RPM to 2500 RPM.

Thanks to its timer, this vortex mixer can run by itself after a defined time limit, allowing users to work on other higher priority tasks.

A true vortex in every vessel

SKU: MXCLPHCVMS
MFG Part Number: EW-04725-60
Enter in the offer amount and we will either match it in real-time by adding it to your cart at the lower price, or respond back to you via email within a couple hours.
Enter your offer amount (you can only make the offer a single time).
$
Congratulations, your offer has been instantly accepted and the product has been added to your cart at the lower please. Click on the "Checkout Now" below to secure this lower price within the next 3 minutes before it expires!
Checkout Now
You are almost there! While this specific offer amount cannot be instantly accepted, please fill out the short form below so we can email you back a possible acceptance within a few hours.
Thank for your information, we will response back to you soon.