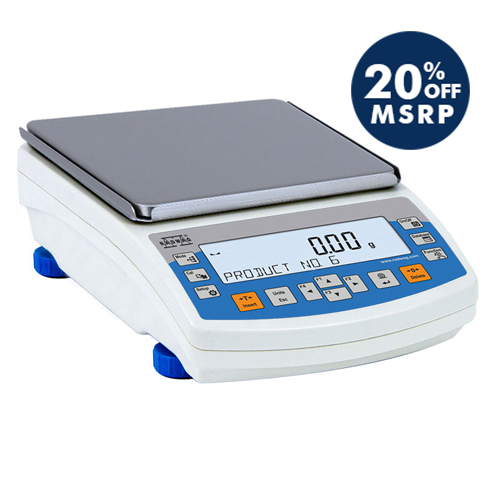 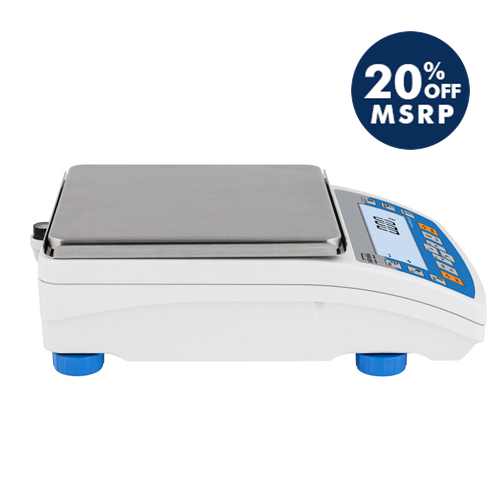 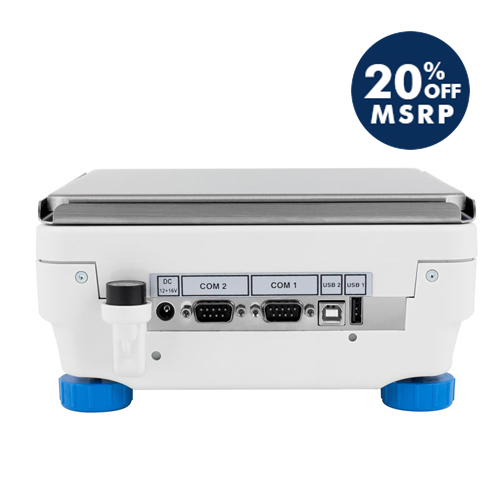 The PS 6000.R2 Precision Balance from Radwag has you taken care of for all your weighing requirements. Can recognize mass variations with its 10 mg readability, the Radwag PS 6000.R2 warrants high performance sample weighing of particulate matter or small samples, obtaining close and reliable measurement values. Whether focusing on requirements of medical and pharmaceutical studies, production and industrial operations, food and textile industry, or chemistry applications, this 10 mg sensitivity scale makes way for uncomplicated weighing. In need of a higher division size option? You may want to try the PS 1000.R2 Precision Balance from Radwag instead.

When it comes to achieving duplicatable results for your routinary weighing applications, you can trust the PS 6000.R2 Precision Balance from Radwag that presents 15 mg repeatability. Even if multi-users are handling the Radwag PS 6000.R2, the model brings about high precision weighing measurement values all throughout your weighing processes for reliable results, that is of course with similar settings followed. If you need higher repeatability from the same manufacturer or another well-known brand, why not check the the PS 4500.R2.M Precision Balance from Radwag instead

Make sure you review the sample loads you will be weighing at present as well as in the future before acquiring a lab scale. Your samples should be within the capacity range of the model and won't spill over its weighing pan. Through the Radwag PS 6000.R2, you can work on light or heavy materials, as long as these do not exceed its max capacity of 6000 g and its 195 mm weighing pan. Because the scale features internal calibration, permitting fast self re-calibration anytime the unit is moved from one area to another, weighing precision and accuracy won't be a problem. Studying hefty samples? Go for the PS 6100.3Y Precision Balance from Radwag. But if you need something similar to this PS unit but of a different model or from another popular brand, check out the PS 6000.X2 Precision Balance from Radwag

Because this Radwag PS top loading balance doesn't depend on manual usage of test weights when it comes to calibration, weighing precision and accuracy are nothing but assured. Having internal calibration in its list of features, this model presents trouble-free re-calibration as needed.

The balance is compliant to ISO standards, following rigid measures when it comes to routine testing, calibration, preventative maintenance and more as well as its print formats.

Your research' credibility is fortified with this Radwag model since it produces GLP-compliant reports. Formatted to include not just date, time, and balance ID but also other relevant data to trace activities, this unit is recommended for non-clinical data submissions, traceability of data, as well as record keeping and quality purposes.

Capable of clearly rendering weighing data through a high contrast, bright, and large LCD screen, the Radwag PS 6000.R2 lowers data readout blunders that may be possibly brought about by working in poorly lit workrooms.

Connecting to the internet is uncomplicated with this precision scale that comes with wifi capabilities.

Elevate lab output and take it to the next level with your lab methods by getting faster weighing results with the PS 6000.R2 Precision Balance from Radwag that stabilizes in just 1.5 seconds. This unit quickly transfers weighing data to multiple computers, devices, and even printers since it has USB and RS-232 ports. In addition to these features, users won't ever worry about conformance to ISO and GLP standard requirements since this Radwag balance presents compliant reports. This saves time previously used up formatting these that can then be redistributed to tasks of higher priority.

SKU: PSRDGPS6000R2
MFG Part Number: PS 6000.R2
Enter in the offer amount and we will either match it in real-time by adding it to your cart at the lower price, or respond back to you via email within a couple hours.
Enter your offer amount (you can only make the offer a single time).
$
Congratulations, your offer has been instantly accepted and the product has been added to your cart at the lower please. Click on the "Checkout Now" below to secure this lower price within the next 3 minutes before it expires!
Checkout Now
You are almost there! While this specific offer amount cannot be instantly accepted, please fill out the short form below so we can email you back a possible acceptance within a few hours.
Thank for your information, we will response back to you soon.