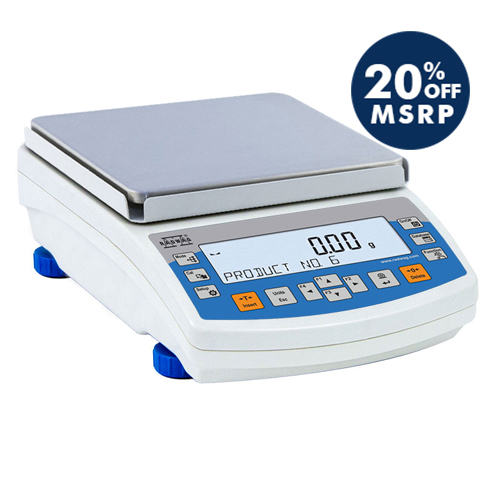 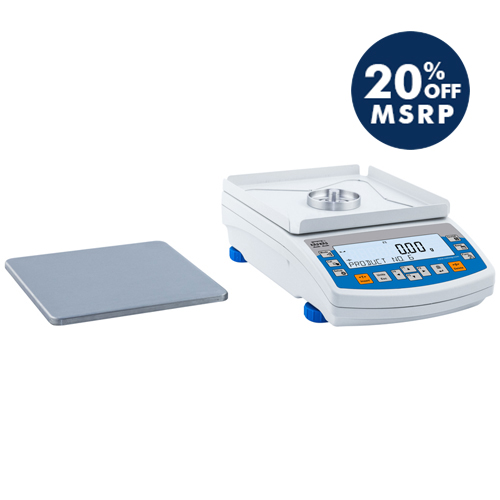 With the Radwag PS 6100.R2, having multiple users running the balance is never a problem when it comes to getting results that can be reproduced. Presenting a 10 mg repeatability, this Radwag balance rolls out similar weighing values provided that the same conditions are implemented so it is ideal for daily weighing applications. Because you obtain high precision measurement values, you have more time to analyze datad instead of just spending it for transcription or re-recording of data each and every time. Still undecided and looking for a unit with a higher repeatability value? Opt for the PS 1000.R1 Precision Balance from Radwag instead.

Multipurpose Sample Weighing At Any Time or Place

The Radwag PS 6100.R2 allows you to work on a maximum load of 6100 g with its spacious 195 mm weighing pan. Weighing accuracy and precision for the smallest quantities of samples is verified with the unit's internal calibration feat for quick self-recalibration anytime or anywhere even if it is transferred from one room to another. For tasks that deal with heftier substances, possible alternatives to choose include the PS 10100.R2 Precision Balance from Radwag or the Explorer EX6202/E Precision Scale from Ohaus with a higher capacity but the same readability as this Radwag PS model. However, if you just need another model but with the same capacity as this lab scale, you can get from the PS 6100.3Y Precision Balance from Radwag instead.

This Radwag PS precision scale has an internal calibration feat, recalibrating as desired while also adapting to variance in time, movement, stability, and temperature. This supports weighing accuracy and precision even if the unit is relocated on a regular basis.

Because this top loading scale is ISO compliant, it prints out ISO recognized reports and stands by a high quality risk based process management system and stringent measures when it comes to routine testing, calibration, preventative maintenance and more.

Keeping tabs on activity history carried out for your experiment or study is easy-breezy with this balance model from Radwag because it returns reports compliant to GLP. Implementing GLP guidelines, reports printed include date, time, balance ID, and other relevant data, saving you more time intended to have these formatted.

Decreasing blunders brought about by users when it comes to data readout is possible with the Radwag PS 6100.R2 precision balance because it vividly presents weighing results through its bright and large LCD screen. Positioning the unit even in rooms with bad lighting conditions would not be an issue because you can still read values clearly, even with different angles considered.

Transmitting and accessing weighing data are two fundamental capabilities that you should also take note of when acquiring a lab scale. With additional connectivity solutions come a more effective work process. The Radwag PS 6100.R2 has you covered because it includes wifi capabilities to connect to the internet.

Generating results in just 1.5 seconds, the PS 6100.R2 Precision Balance from Radwag is instrumental to boosting up laboratory productivity. Efficacy is fortified because this Radwag top loading balance also has USB and RS-232 ports, allowing users to carry over acquired data and results to devices remotely close to the unit in a shorter period of time. Users can also save up more of their time with this precision scale because it already generates GLP and ISO compliant reports, so you won't need to reformat these anymore.

The new PS.R2 high capacity balances (6100, 8100 and 10100) feature centrally fixed weighing pan and additional sealing ring. This solution improves air-tightness and simplifies cleaning. To advance accuracy, the new balances have been equipped with metal anti-draft shield. Additional assets are both expanded capacity (even up to 10.1 kg) and smaller dispersion of weighings – better repeatability.

SKU: PSRDGPS6100R2
MFG Part Number: PS 6100.R2
Enter in the offer amount and we will either match it in real-time by adding it to your cart at the lower price, or respond back to you via email within a couple hours.
Enter your offer amount (you can only make the offer a single time).
$
Congratulations, your offer has been instantly accepted and the product has been added to your cart at the lower please. Click on the "Checkout Now" below to secure this lower price within the next 3 minutes before it expires!
Checkout Now
You are almost there! While this specific offer amount cannot be instantly accepted, please fill out the short form below so we can email you back a possible acceptance within a few hours.
Thank for your information, we will response back to you soon.