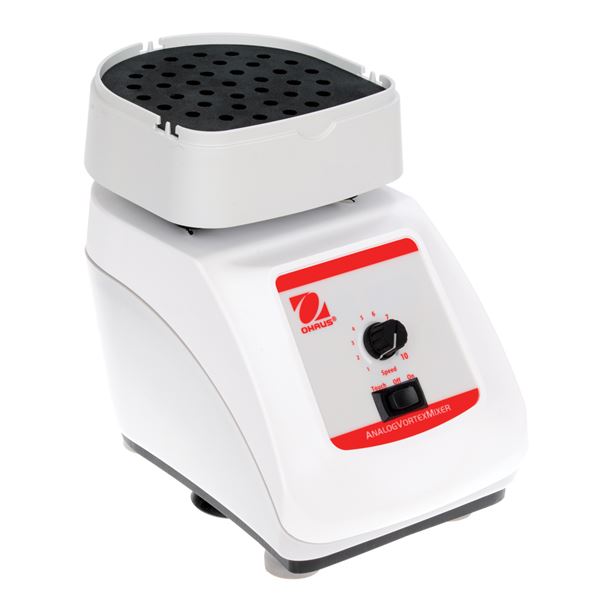 Finding the right lab mixer for your scientific or medical facility, lab, or university need not be an anxious-making task. Reviewing your present and future applications, sample types, and how much of these you will be handling can help you get the most appropriate laboratory mixer model for your sample preparation and testing, as well as other experiments. Doing so not only brings you to the best choices available but at the same time reduces instances of product replacements because of changes in your application conditions. If you require a Ohaus mixer to emulsify, homogenize, disintegrate, or mix samples of up to 2.4 lbs max, then the VXHDAL Vortex Mixer from Ohaus is the perfect choice for you to go for. In the look out for something with a bigger capacity? You can go for the BR5000 Everlast Rocker 247 from Benchmark Scientific. But if you are just looking for a lab mixer with a similar capacity as this Ohaus one check out the VXHDDG Vortex Mixer from Ohaus instead.

To ensure mixing productivity and efficiency, it’s advisable to procure a mixer that can supply the right speed type and speed range that satisfy the activities you will be working on. Applications that involve altering mixing speeds while agitating samples call for variable speed mixers like the VXHDAL Vortex Mixer from Ohaus. Modeled to carry out accurate mixing while also giving users the power to switch from gentle to vigorous mixing as needed, the robust Ohaus VXHDAL features a speed range of 300 RPM to 3500 RPM best not just for cell culture and microbiology tasks but also for research and development, the production process, and QA analysis in pharmaceutical, food and beverage, as well as electronics industries. If you want to look at another model, you might want to consider the VXHDDG Vortex Mixer from Ohaus with the same max speed and speed type from the same series and brand

A plethora of laboratory mixing instruments are available in the market but don’t be confused on which one to purchase. Most analytical research centers and bioscience facilities call for vigorous agitation and mixing of samples, homogenization, cell disruption, and resuspension of cells. These tasks can be completed by vortex mixers that might be small in size and may come in different formats to accommodate vials, test tubes, beakers, or microplates but can definitely offer dependable mixing with precise speed and time control. Achieve results that can easily be replicated for isolation of DNA fragments, protein analysis, and enzyme reactions with the analog VXHDAL Vortex Mixer from Ohaus offering an orbital mixing motion . Incubating cultures is never a problem with this unit as it can yield exact temperatures ranging from 4°C - 40°C.

You'll never sacrifice accuracy, repeatability, and reproducibility with the Ohaus VXHDAL as it is designed with an easy-to-use LED screen for clear readout of laboratory mixer data.

Fluids and samples are thoroughly agitated by this Ohaus vortex mixer with an orbital mixing motion.

Set the required speed settings with the Ohaus VXHDAL with its analog control.

Start from one speed and then shift to another with this variable speed mixer capable of changing from 300 RPM to 3500 RPM.

With a CE mark, users are ensured that the Ohaus 30392148 vortex mixer meets product standards of EC directives.

Heavy-Duty Vortex Mixers feature a heavy-duty design and efficient motor to permit continuous duty operation, and the ability to handle accessory components over the entire speed range. Analog variable speed models or microprocessor-controlled digital models offer exact speed control when applications demand repeatable results. A wide range of accessories are available for microtubes, microplates and a variety of tube sizes from 0.5 to 50 ml.

SKU: MXOHAVXHDAL
MFG Part Number: 30392148
Enter in the offer amount and we will either match it in real-time by adding it to your cart at the lower price, or respond back to you via email within a couple hours.
Enter your offer amount (you can only make the offer a single time).
$
Congratulations, your offer has been instantly accepted and the product has been added to your cart at the lower please. Click on the "Checkout Now" below to secure this lower price within the next 3 minutes before it expires!
Checkout Now
You are almost there! While this specific offer amount cannot be instantly accepted, please fill out the short form below so we can email you back a possible acceptance within a few hours.
Thank for your information, we will response back to you soon.